skip to main | skip to sidebar

I can look back over the past few years and say without a doubt, everything good that has happened has happened because of beer.

It started quite a few years back, when Ice House was the good stuff...but the obsession didn't really start until Jano invited me to brew with him 6 years ago. I broke his hydrometer while I was "helping" clean up, and thank baby jebus, was invited back. The hydrometer was replaced, and I still continue breaking the hell out of them to this day.

In the course of the past few years, I have met, hands down, some of the most intelligent and kind people that I have ever come across. Lifelong friends bound by the pursuit to create something special with their own hands that really gives meaning to the word "craft" and "artisan" that seem to be used so much these days. Wine, beer, mead, or seeking out and sharing rare beverages from around the world through trading or travel, these guys and girls are what I consider true individuals.


Just a few of the people I idolize with whom I've shared countless pints, shots, drams, tall boys, snifters, boots and mugs with over the years and have influenced my time at Beacon Hill and have encouraged, inspired and helped in countless ways:

Rodney will always be my partner. The brewing thing would have never happened without him. Late nights/early morning zymurlogical feats of strength with my brother. We have brewed a lot of beer together.

I've seen Alejandro turn Big Al Brewing into a reality, and look very fondly back to the days of panicked homebrew accidents in his garage and trying to figure out this crazy piece of equipment called a "pump". He's the homebrewer done good. He is living the dream.

Kevin Davey pursued his dream of making German beer by quitting his sweet plumbing gig, going to Seibel, graduating at the top of his class, and not giving up until he landed a job at Chuckanut where he continues to make world class brews.

Mark Emiley works tirelessly for the "cause". Encouraging and promoting homebrewing in Washington through the Washington Homebrewers Association and the Puget Sound Pro-Am. He is a recent BJCP Master Judge and is rumoured to have bugged the governing powers that be so much, they said "F!ck It" with %) 5060 and passed the bill unanimously to stop all of the late night phone calls. He makes some pretty awesome beer and wine too.

Tim Hayner also works tirelessly for the cause, organizing the first mead and cider clinic, Washington Mead and Cider Cup, and also an amazing judging clinic to help everyone understand these simple yet complex drinks. He's also as sweet as the honey he ferments, genuinely one of the nicest and coolest dudes you will ever meet. He's done so many favors for me over the years, he will automatically receive my first born if I ever have children. Over the last couple years, he has grabbed mead and cider bull by the horns, is promoting the hell out of it and is turning out some of the tastiest concoctions you could ask for. He has the ribbons to prove it. His Golden Mash Padel was a no contest and was very well deserved.

Jerome Seipp, my gourmet heavy metal older brother that I never had. His creativity seems to have no boundaries. Graphic design, brewing, cooking and music. He also works his ass off as arguably the most well respected beer judge out there and takes care of anything judge for WAHA. Our BBQ team is looking forward to him taking his turn in the smoke to knock out some Real, Killer, Puget Sound"Q".

Seattle Ratebeer Crew, Tom, Ben, Brandon, Alex, Bob, Clint, you guys have been responsible on quite a few occasions for an aching head the next morning after your generosity in sharing your beers from the far corners of the world and sparked many bouts of inspiration in brewing. You guys have been a great sounding board with honest critiques on beers that I've made...

Fellow Beacon Hill resident and Bellevue commuter Geoff Kaiser's Seattle Brewing News has grown into a very successful source of beery information for those in and around Seattle, and does a great job of promoting the beer scene. He too is responsible for many aching heads the next morning and providing great feedback , and hopefully it goes the same for him after hitting the taps in the basement.

Bek is my everything. Patient, understanding, kind and beautiful in every way possible . And she will love IPA's at some point, if it is the last thing I ever do....

The dream will be realized at some point. Maybe Beacon Hill someday. For now, it's time for Plan B. Stay tuned...thanks for reading, mom.

I received some surprising and upsetting news today about the untimely death of Brewer Jim Quilter. I was fortunate enough to brew with him for the 2007 Pugest Sound Pro Am, and pick his brain about opening a brewery on many other occasions. He was an extremely kind, generous and funny guy. A true individual who's advice and talks I will greatly miss.

Here's to you my friend, I'm raising a pint and hoping whatever there is in store for us when it's over, you and your Iron Horse will have endless miles of open road to ride, and a pint glass that is never empty. Thanks for the laughs, advice, and let's not forget the beer that has made so many people happy!

Raise a pint for Jim if you have a chance. Slainte!

Our Wit beer was chosen by Rock Bottom of Bellevue from the Pro Am to be brewed for the GABF this year. Just goes to show you what an awesome competition the Pro Am is because we didn't even place with that beer. I wasn't going to go to GABF this year, but now it will be the 4th year in a row, and the 3rd that we have a beer in the Pro Am. Brian Young is an awesome dude and luckily RB Bellevue is only a mile away from my work, and luckily Brian likes to get started late, so it will be a late afternoon, early evening brew. I'm pretty happy with the Wit. It's a refreshing summer time beer, good chugability factor, low alcohol, hanging out on the porch passing time sorta beer.
Posted by Colin at 10:55 PM 5 comments:

2nd Place for the Fantome inspired Saison and 2nd for an English Style Barleywine called Ol' Teabagger, which is actually a Belgian Dark Strong that is two years old. No firsts or making it to BOS this year, but I'm pretty happy. Selection from the professional breweries is next Saturday for the recipes they want to brew. A great event with 300 entries that ran very smoothly. Nicely done everyone. It gives me the warm fuzzies to know awesome brewers/judges like you guys are out there.
Posted by Colin at 3:27 PM 3 comments:

This has been a long time coming, but as of today SB 5060 has finally been signed into a law. I got a phone call from Tim "Dr. Decoctor" Hayner while the sweat was still damp on his palm from Gregoire's hand shake. Check out this NPR audio snippet if you're not up to snuff.

Mark Emiley, you are an amazing guy. I look up to you and am proud to call you a friend. Tom Schmidlin, Alejandro Brown, Tim Hayner, mad props guys. Cheers to all the people who called in and hounded their legislators, I'm raising a pint to you guys tonight. Let the celebrations begin! Now if we can just start putting the rush on SB 5615....
Posted by Colin at 7:19 PM 2 comments: 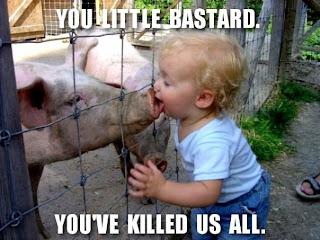 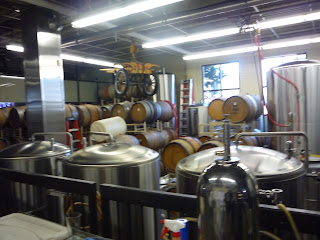 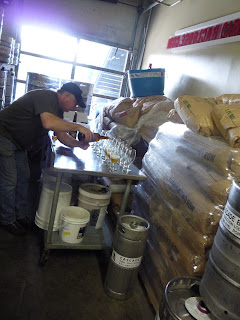 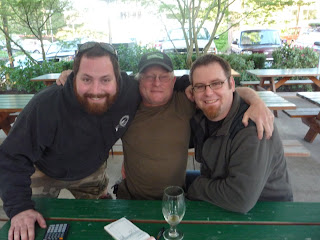 Not really sure where to start...It's been a while since my last post. The period key on my lap top is completely FUBAR, and there is no fixing it. It's kind of put in dent in my willingness to post using a ballpoint pen to press down on the spot where the period key once was. Luckily, the lovely Bekky has let me use her awesome laptop while she is away in Europe.

I finally made it down to Art Larrance's Racoon Lodge and Cascade Brewing. Art is legendary in the craft beer scene and is the creator of the Oregon Brewers Festival. Ron Gansberg is the head brewer and along with his assistant Curtis( who unfortunately was not there), conjure up some of the best Belgian Style and Belgian Style Sour ales I have ever had the pleasure of drinking. Correction : Belgian inspired beers. These are Northwest Sour beers. I have been hearing about Cascade since I had my first sip of the Apricot a couple years back at Uber. It was the very essence of apricot caught in an 8 percent beer. Awesome.

The brewery is beautiful, racks and rows of barrels giving off a patina like quality. Oregon red, white, and even port barrels with some bourbon barrels thrown in for good measure. It's hard to describe, and not to sound completely dramatic, although some of you will understand and hope you will chime in if you've been there, (and maybe I was just getting really, really drunk) the creativity is thick in there. I was trying to break down the samples I was having..smell, taste, what is that spice, how did he get that sweetness that finishes dry... I dunno. I've been to Russian River, I've been to Lost Abbey, which were all great places in their own right, but I felt like I was in...California? Ron's brewery was a comfortable place and I knew we were about to experiencing something very special. And boy-0 was it special.

We started off with a taste of the Blackberry that was clearing in the bright tank (freaking incredible) and from then on, we were treated to barrel taste after barrel taste. We played bucket brigade with the stemmed glasses as Ron slid between racks, pouring us tastes of his blends and creations. I can't tell you everything I got to try, but just let me say, there is going to be some pretty amazing stuff coming out of there in the future. I could get into lactic fermentation, the barrel characteristics, blending, carbonation, types of fruit, Ron's brewing Kung Fu...they are all a factor in an awesome product.

More stemmed glasses, bottles started popping, a side by side of The Vine and Cuvee de Castleton was set up. Poor Cuvee didn't have a chance . Small 1/6 barrel kegs were tapped, more bottles popped. Back down to the barrels to try some more stuff. The party was moved outside to enjoy the beautiful afternoon.


Thank you Art. Thank you Ron for your kind words and generosity. It was an afternoon I won't soon forget. Try these beers if you haven't already. Finer establishments will have them on tap and bottles. If you have, share it with someone who hasn't and spread the word.

Cheers all!
Posted by Colin at 8:54 PM No comments:

On Tap and Bottles

Music to brew by